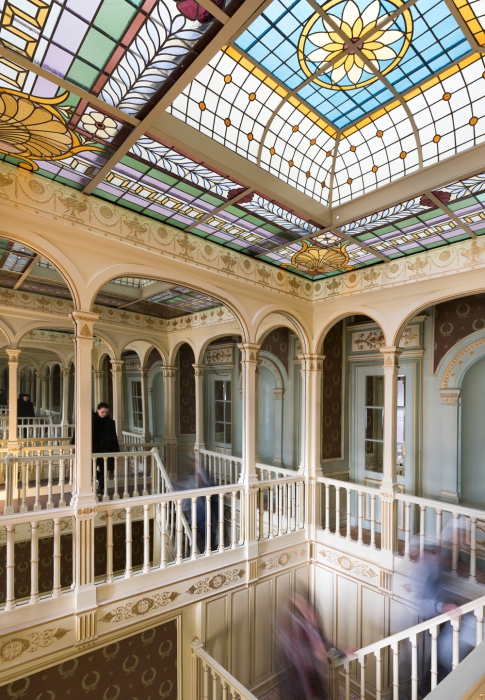 This Thursday 13 June 2019 in Barcelona, Ma² has won the Special Price of the Jury for its restoration work on the Maison Saint-Cyr, Art Nouveau masterpiece.

Considering all the works submitted, the Organising Committee has decided this year to award a special Price of restoration to the intervention that has demonstrated the highest level of quality, precision and respect from the technical and methodical point of view”.

A wonderful recognition of the scientific approach and work of goldsmith generated by the team Ma² and all the associated stakeholders on the work of Gustave Strauven. The Jury underlined “the excellent work performed to highlight the features of an iconic building in the city.”

Based on the conviction that heritage, as an engine of social integration and socio-economic resources of the highest importance, deserves to be highlighted and stimulated, this competition aims to distinguish good heritage practices and to enhance and disclose the quality projects which contribute to the preservation of the collective memory. As a reminder, signed in 2018 by the European and Belgian culture Ministers, the Davos declaration highlights the importance for Europe of a built quality culture.

The AADIPA competition is articulated in two categories:

For this fourth edition, the selection committee received 239 applications, bringing the number of countries represented to 23. When analysing all those projects, the jury impressed by the scientific approach, systematically implemented by Ma², decided to create a SPECIAL RESTORATION AWARD.

Intervention of the Bureau Ma² on the Saint-Cyr House

Designed in 1900 by the architect Gustave Strauven, this Art Nouveau pearl classified in 1988, has just undergone a masterful and meticulous interior restoration, of the roof, the rear façade as well as the outdoor spaces.
Conducted since 2015 by Francis Metzger and the architects of the Ma² Bureau of whom Lise Cuykens, this high restoration campaign focused on making archives, remnants, stratum and residual material talk, to rediscover the essence of the project imagined by its architect and restore life and lustre to the multiplicity of the initial decor styles which founded this masterpiece so original.
An intervention made possible by the application of the Ma² methodology, the precious competition and the joint effort of the entrepreneur In Advance, other enterprises and artisans involved in the project, some experts of the IRPA-KIK of the Direction of the Cultural Heritage and obviously the contracting authority. In addition, the first renovation, the one in the front facade, had already been carried out in 2011 by SumProject and Origin Architecture & Engineering.
It is impossible to enumerate everything here but we are talking about the restoration of a stained-glass in the large stairwell, of the reconstitution of the Japanese decoration of the main entrance, the restoration of the earthenware and wall friezes, the reconstruction according to the original colours and the composition of the granites on the ground, the restoration in the original state of the round chimney in glazed green bricks, the reissue of a embossed wallpaper with green background and bronze pattern, etc.